Cost to Build a Detached Garage

A few months ago we wrote an article talking about if a three car garage is worth the cost. And of course, we think the answer is a resounding “yes”. We received a lot of questions from that post, one of which was “How much did your three car detached garage cost?”

I thought it would be nice to do a breakdown of how much our three-car detached garage costs. Keep in mind, with this build and garage we were our own contractor, so this will reflect within the cost. We did not pay an overhead of 15-20 percent for someone to oversee the project. Serving as our contractor, we hired our own subs and paid each one directly. Doing this, we also knew exactly how much we spent out.

Also, as you know we like to DIY parts of our own builds. With the garage portion, we did our own painting and plumbing which saved us several thousands of dollars.

Keep in mind before any foundation work or building is started, the garage was staked out by a surveyor to plot exactly where the garage would go. I am breaking down the cost by each phase of the build. The estimate if based off of a 1,000 square foot garage. Our garage includes an unfinished area at the top which would also be around 1,000 square foot.

Framing is the next step. We also hired this part out to the same crew who framed the house. To frame the entire 1,000 square foot garage the total cost was $12,700. We did get quite a deal because the framers were already here framing the main house structure. They framed the garage for a low price of $8.50 for a total labor of $8,500. The remainder $4,200 is for materials. Again, keep mind our garage is basically two stories which required much more material. It also has three dormers which are more labor intensive.

The guy we hired to do the electrical also was very inexpensive because he was already here working one the main home. For the garage only, he charged us $2,000. This price was for material and labor which included wiring for 3 overhead lights, 10 electrical outlets inside and out, 2 flood lights, and 3 lights over each garage door.

Plumbing is not something that is typically included in a garage, but we added a small half bath for the pool area. We put in one small sink and toilet. Total material was around $700, and there was no labor cost since my Dad did the plumbing.

Hanging drywall is not a fun job and is always another one we sub out. For sheetrock materials and labor it was a total of $4,400. We only finished the downstairs area. The top area is still left unfinished. The breakdown here is $2100 for the material leaving the remainder $2300 for labor.

For exterior material, we used Hardie plank. This had to be put up and painted. For installing the entire Hardie plank for the garage trim and all, the cost was $2200 and the material was around $2800. This was a total of $5000.

On our house porches and breezeway roofs, we used standing seem metal. Everywhere else we used architectural shingles. We used this same shingle on our garage. For both labor and material, this cost around $3,400.

We ordered the garage windows on the same purchase of our entire home. We have six windows in our garage. We ordered our windows the same as the rest of our home, black on the outside and unfinished wood on the inside. The total for all five windows was $1640. The labor for installing the windows was included in the framing labor.

We purchased two exterior doors, both going into the pool area. They were each around $200 for a total of $400.

As for the painting, the labor was no cost considering we painted both the exterior and interior on our own. This is a great way to save several thousands of dollars if you can tolerate a few days of hard work and don’t mind painting. We did purchase the interior and exterior paint for a total of around $360 dollars.

The finishes of the garage is what really makes it pretty and gives it the look you want. We used three black barn gooseneck lights for above the garage. These were fairly inexpensive and gave the garage the look we wanted keeping with that same modern farmhouse style. We also used 2 flood lights, and three small flush mount interior lights for a lighting total of around $1200. The price of installation was included in electrical.

The guttering was installed for the entire home at the same time, but the garage cost was around $900.

We have three basic garage doors that we painted black. The garage doors, garage door opener systems, and all installation totaled $1290.

Below is a chart and breakdown of the total cost of the garage. 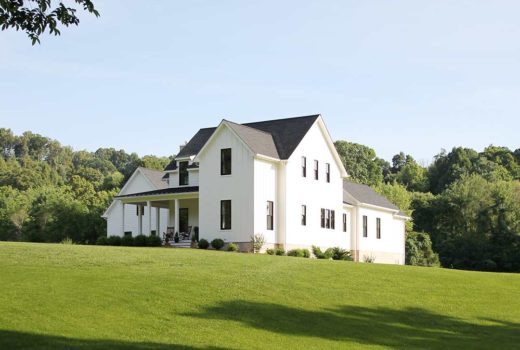 Five Important Tips for Being Your Own Contractor 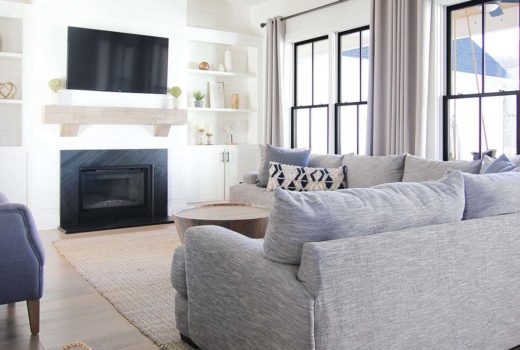 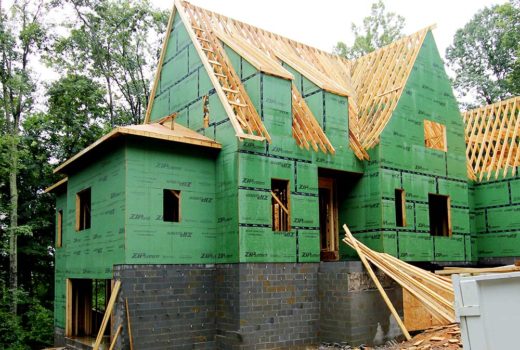 Five Obstacles when Building a House and How to Overcome Them

Enter your email address below to become part of the Plank & Pillow community. We’ll let you know about all of our new content and what we’re up to.