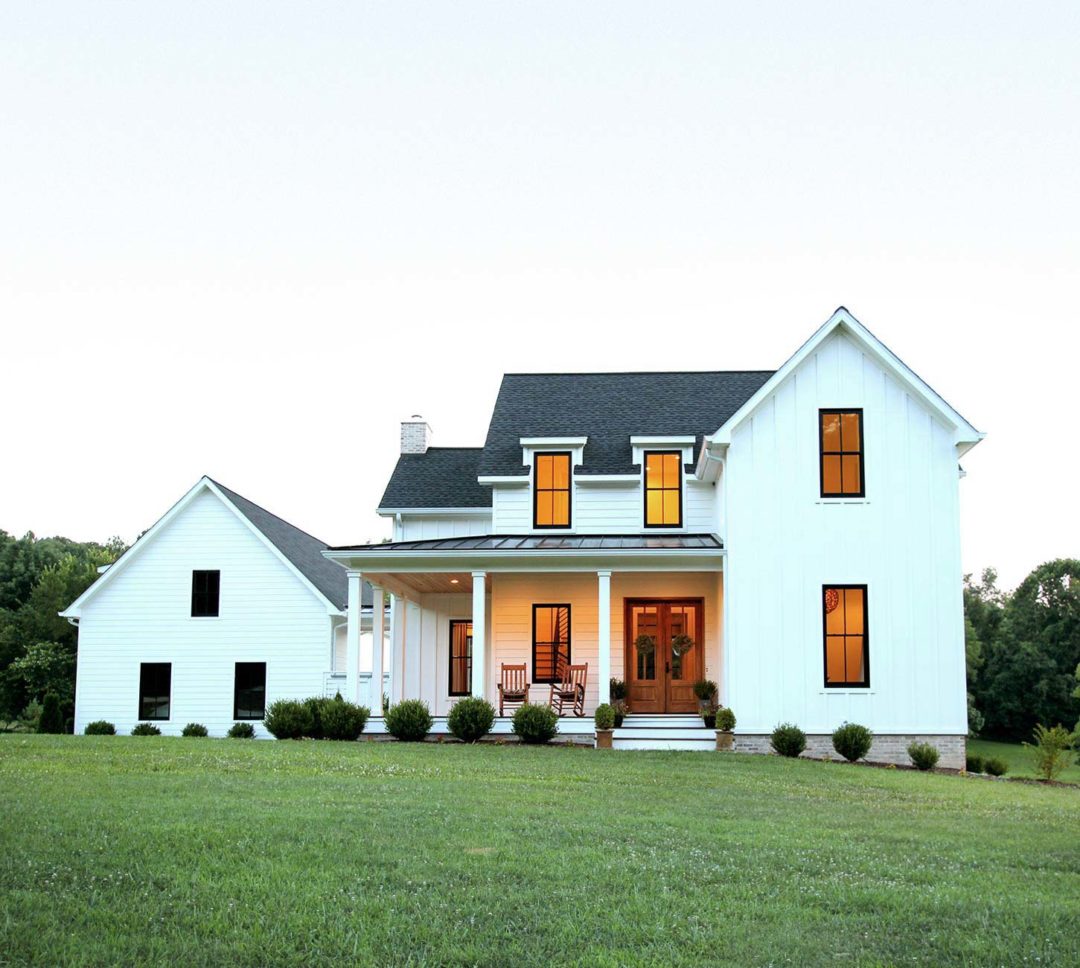 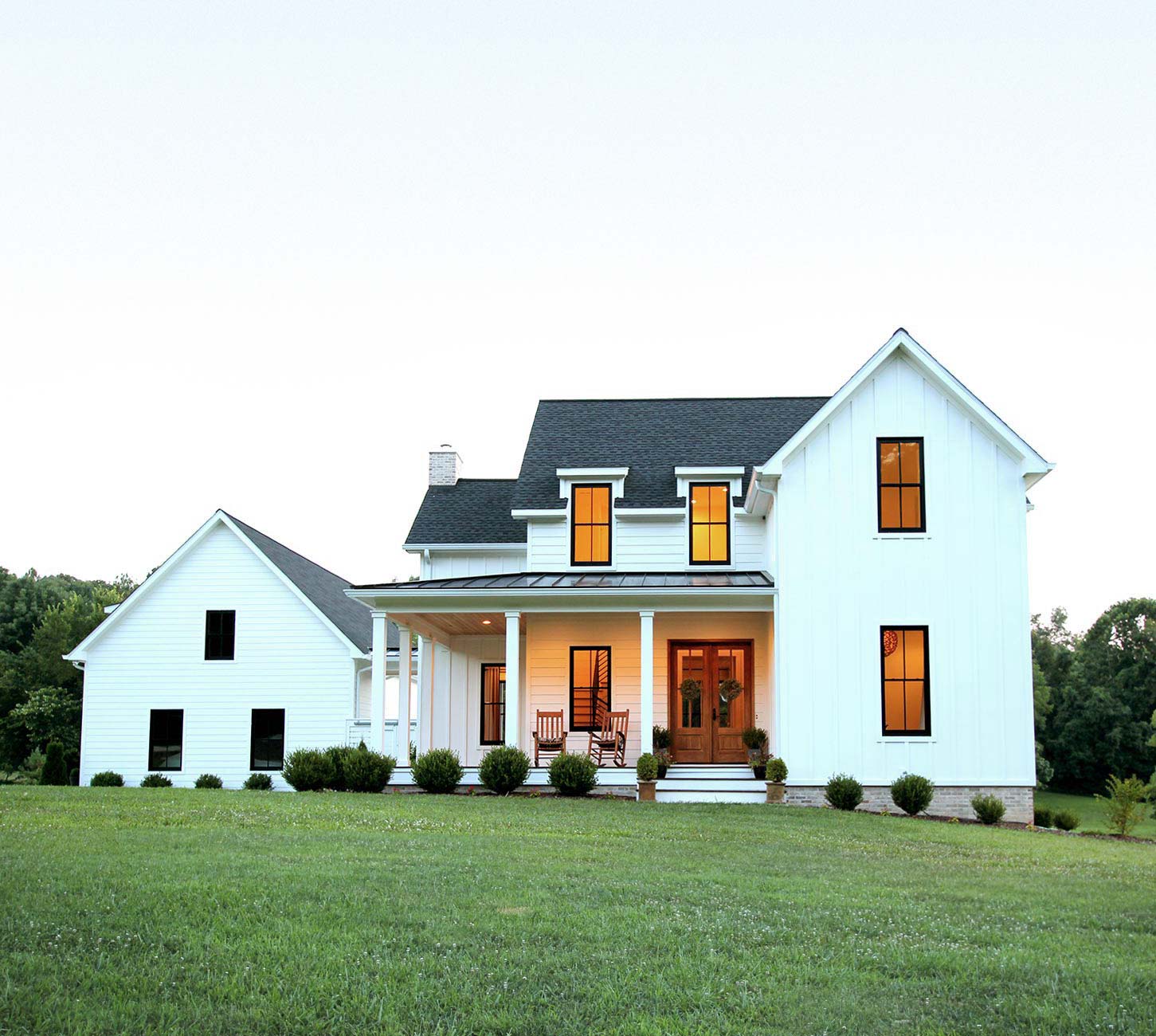 This is where we call home…currently. We’ve been known to move from time to time, but we have been here for over two years, and absolutely love it. So who knows, we might stay a while. In this post, which will be the first of several home tour articles, I want to show you around the exterior of our house and share some of the thinking behind what we did.

Every year we go to Isle of Palms, SC on vacation. It’s located right outside of Charleston. We’re always inspired by the beautiful white modern/costal farmhouses you’ll find there and on neighboring Sullivan’s Island. Our idea was to borrow a lot of those elements and use them on our new house here in Tennessee.

If you have ever built before, you know that finding a plan can be nerve racking. You want to get a plan that is perfect and meets all your needs, but it’s easier said than done. You almost always have to make a compromise somewhere.  At one point we considered hiring an architect, but ultimately decided against it since we had never went that route, and to be honest, we were a little intimidated by the process. 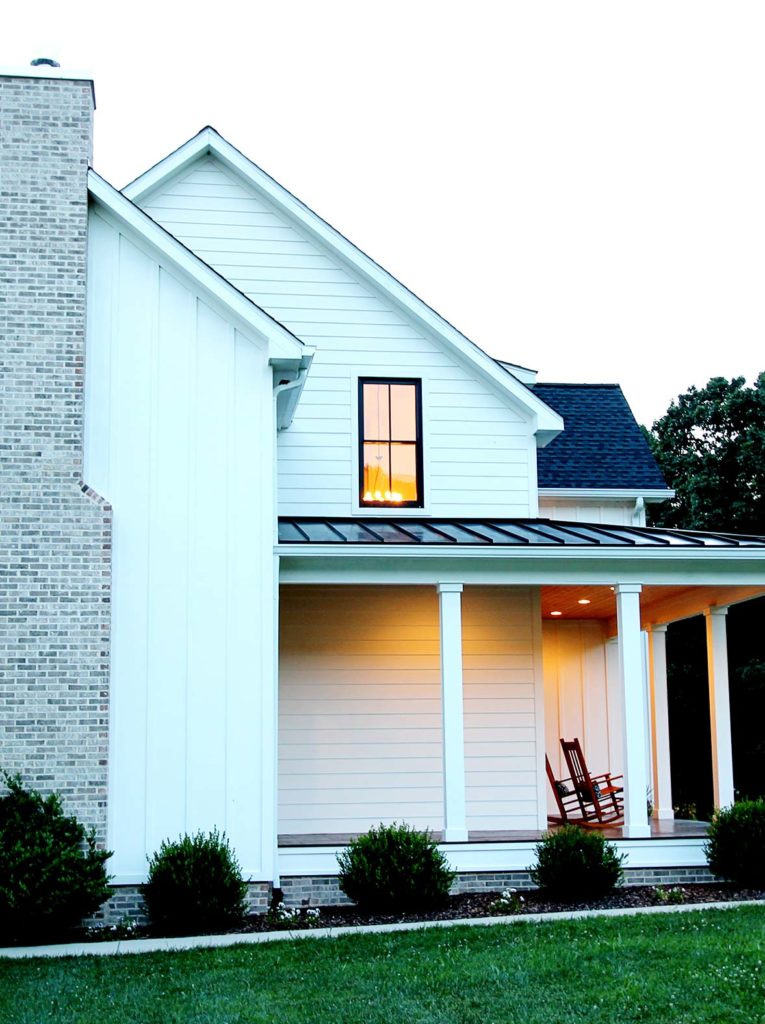 So we ended up finding a plan online called Mama Crovatt’s House. It was extremely close to what we were wanting and definitely had that farmhouse vibe. Of course we did make a tweak or two to the plan, like adding a garage. Ok…that’s more than a tweak, but it was necessary since the plan didn’t include one. 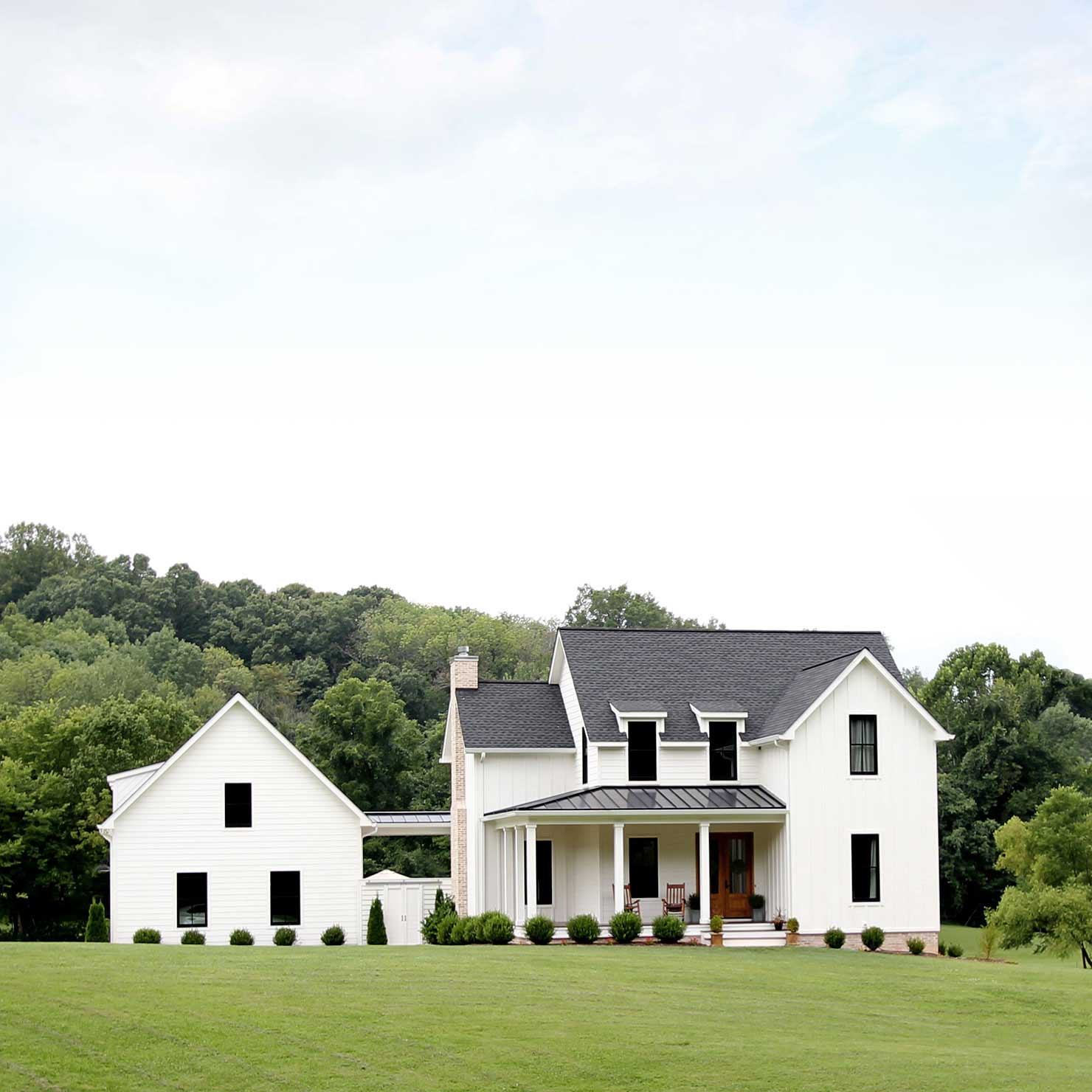 So, what makes a farm house modern? This was the question we asked ourself. I think people have varying opinions on this, but I believe a farmhouse has to have a few key characteristics to have that modern look. Not all of these characteristics are a must, but the house needs to have at least a few of them. For us it was important to find the right blend – not too “farmy” and not ultra modern. So here are a few things that we tried to include: 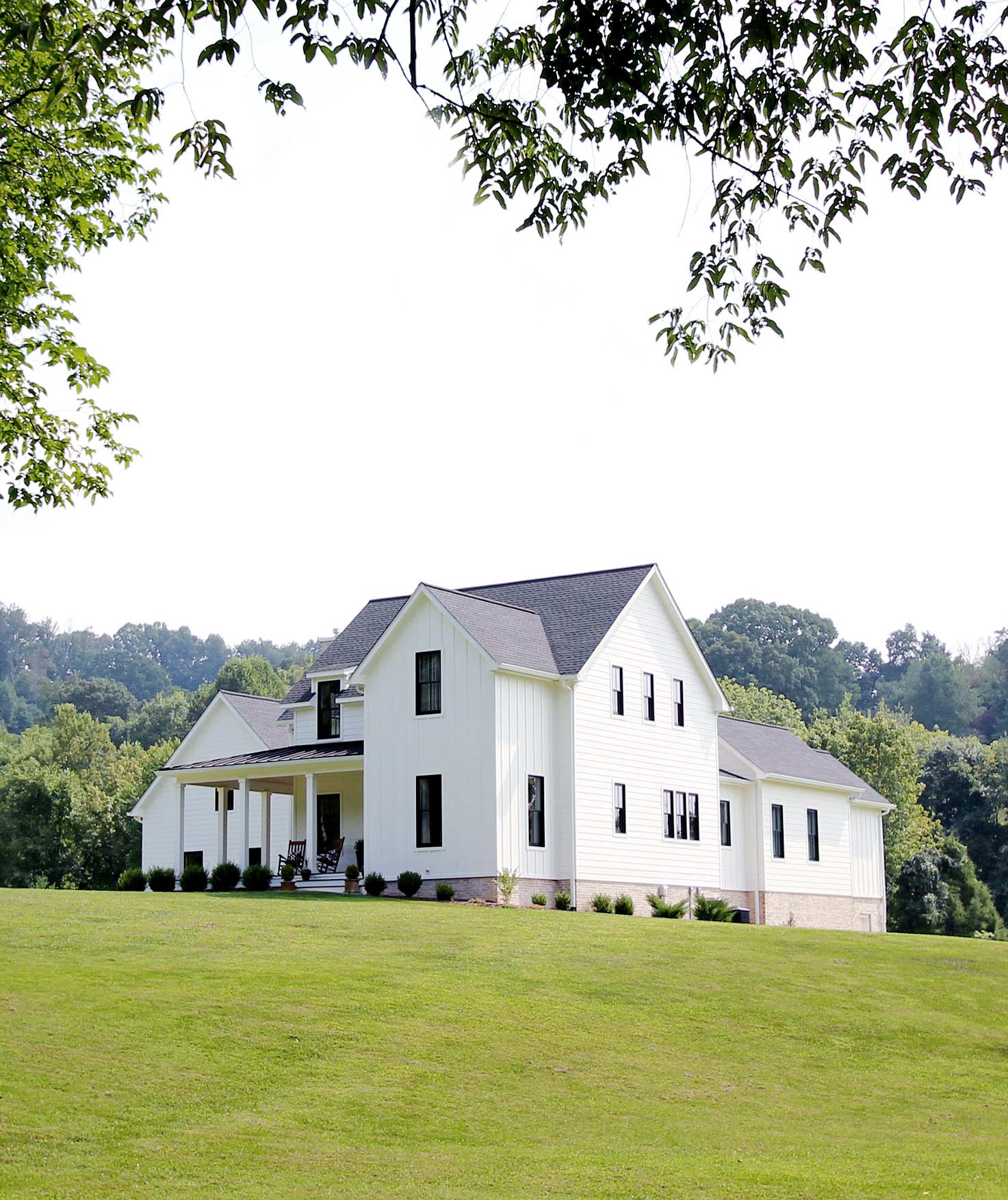 Clean Lines: If you choose the right plan, this takes care of itself. Farmhouse’s typically have simple lines. And you can take it a step further by avoiding ornate details, keeping things simple and using white as your exterior paint color. And nothing says “farmhouse” and “modern” like white. But we didn’t want to go too bright with the color. So we chose a white that had some creaminess to it. It’s called Cream Delight by Valspar.

Mixed Exterior Siding: We were originally going to do the whole house in board and batten, but after we saw how labor intensive it was, we decided to give our building crew and budget a break by taking a different approach. We decided to alternate from board and batten to lap siding on the different sections of the house.

Black Windows: They aren’t a must, but I think it definitely helps with the modern look. Especially on an all white house, you need something to pop. And it creates such a clean and crisp look. When we told our building supply sales rep, we were doing black windows he though we were crazy. It’s hard to believe that just two years ago, black windows were such a new idea – at least in our area. And actually, you still don’t see them being used often where we live. We ended up going with Plygem. They were the best combo of quality and affordability. As you will see in upcoming home tour articles, that we also have black windows on the interior. Doing this was very rare, and the price reflected it. So to save money, we went with unfinished wood on the inside and painted them black.

Standing Seam Metal Roof: We wanted so badly to do a galvanized metal roof on the whole house, but the budget did not allow it. So we opted for black architectural shingles on the house and black metal on the front porch, back porch and breezeway.

Industrial Lighting: We really wanted the lighting on our garage to make a statement. We went with oversized black gooseneck lights above each garage door, which we found on Houzz. 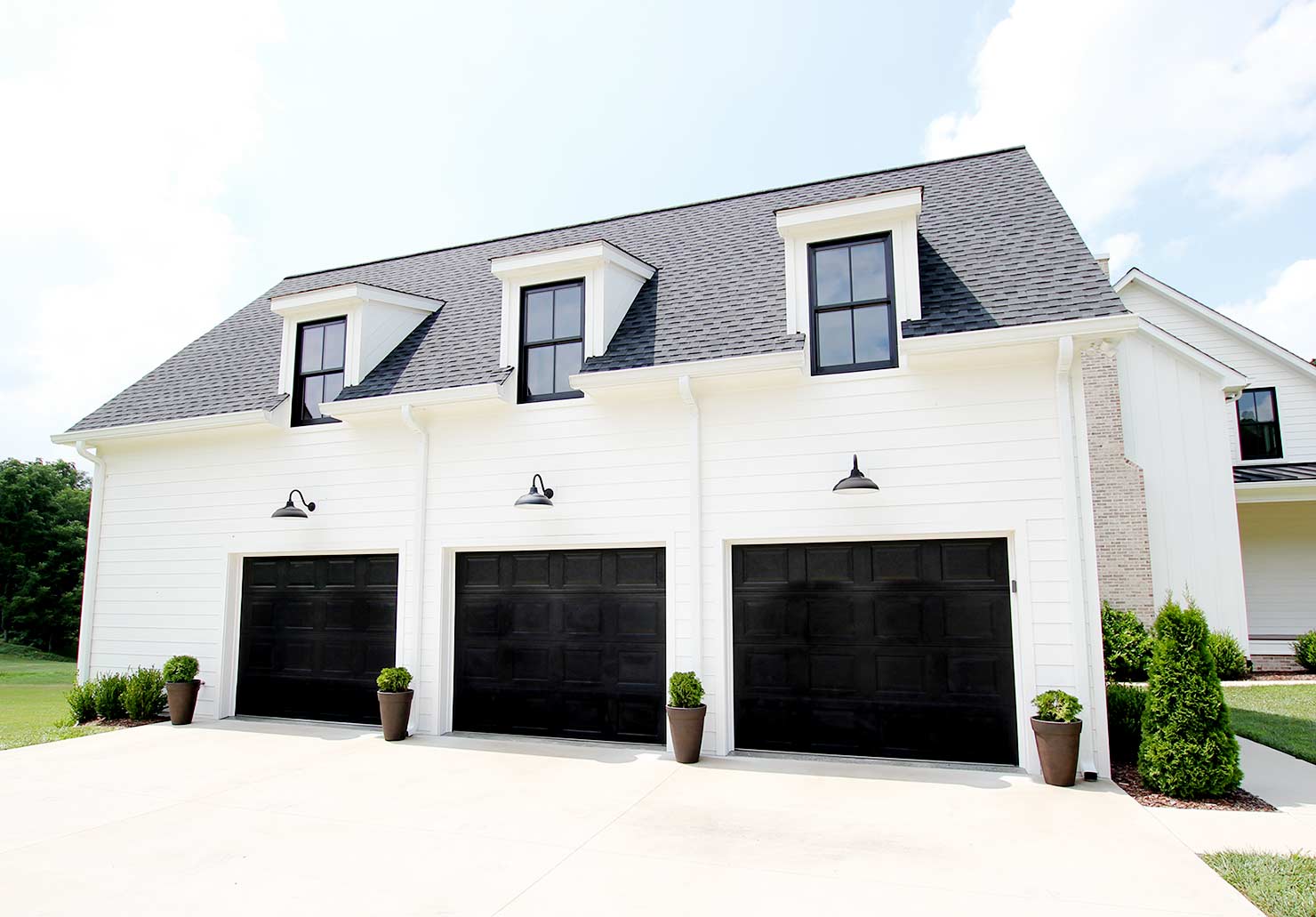 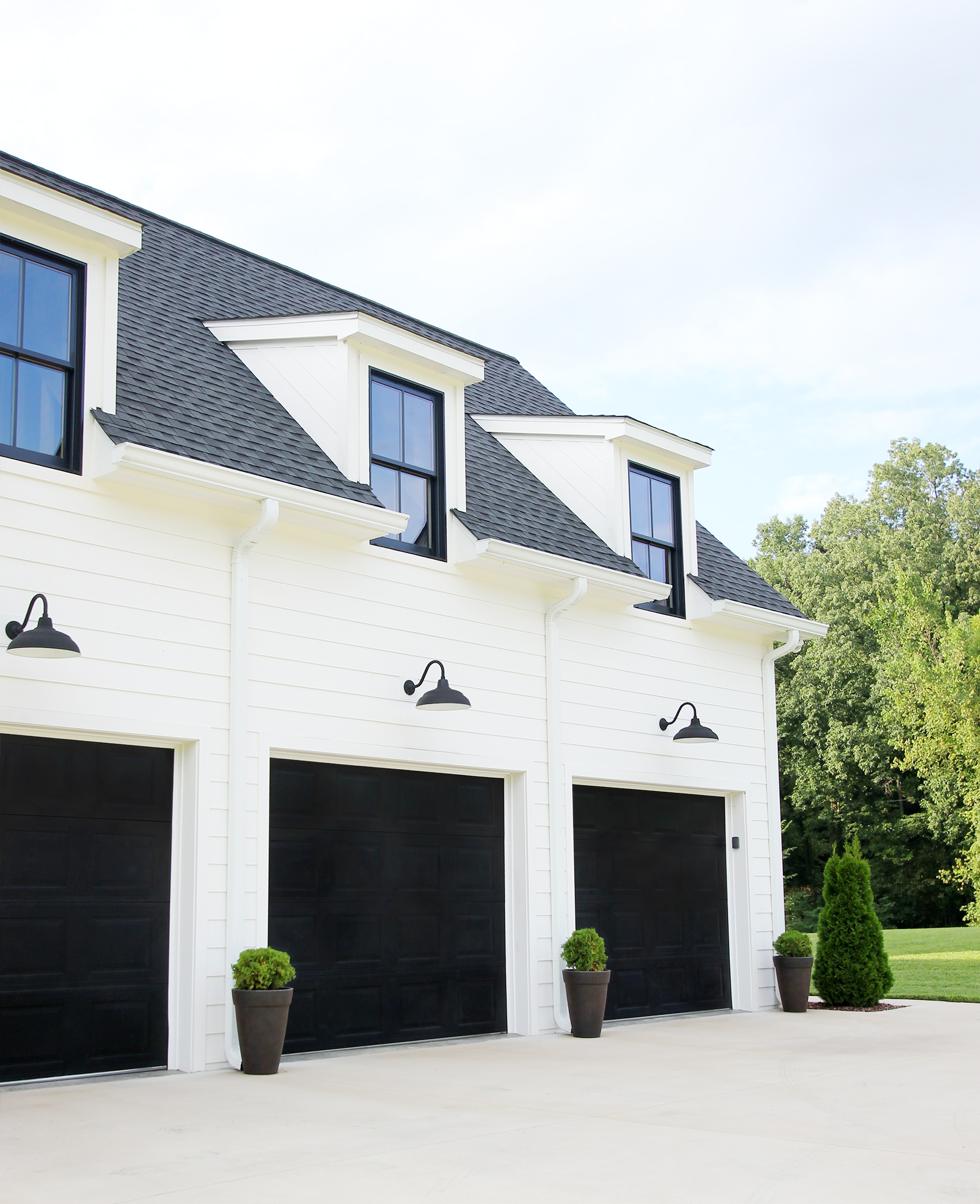 To add some contrast with all of the white siding, we incorporated some wood elements. On all of the porch ceilings we used pine tongue and groove planks. For the porch decking we were originally going with an engineered material. But when it arrived on site, we could see that it had too much of an artificial look. So we opted for plain ole pressure treated decking, which ended up being much cheaper. We finished with Cabot Gold, which gave it an almost interior hardwood look. 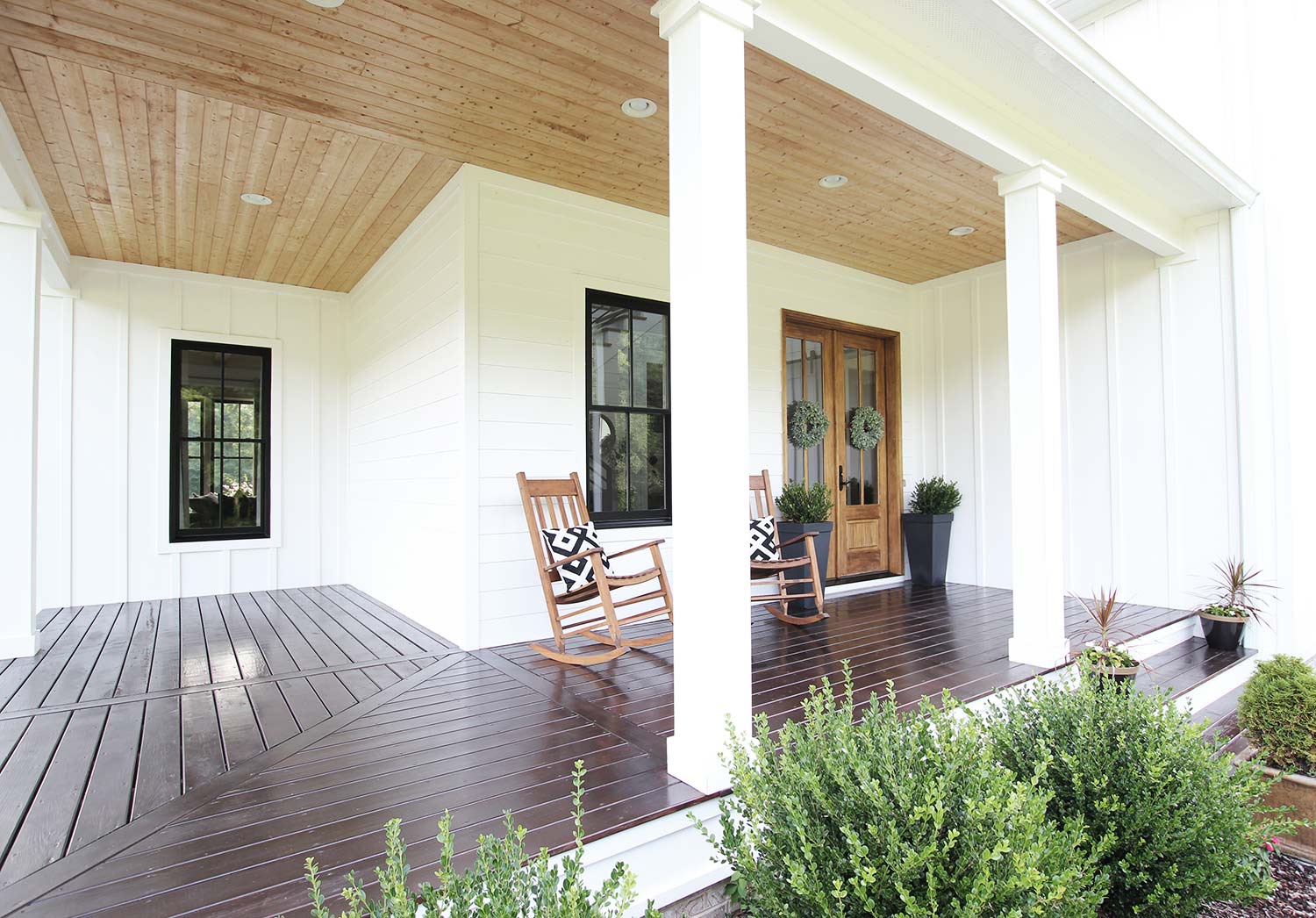 The front door and back porch door are mahogany with a clear coat of polyurethane. 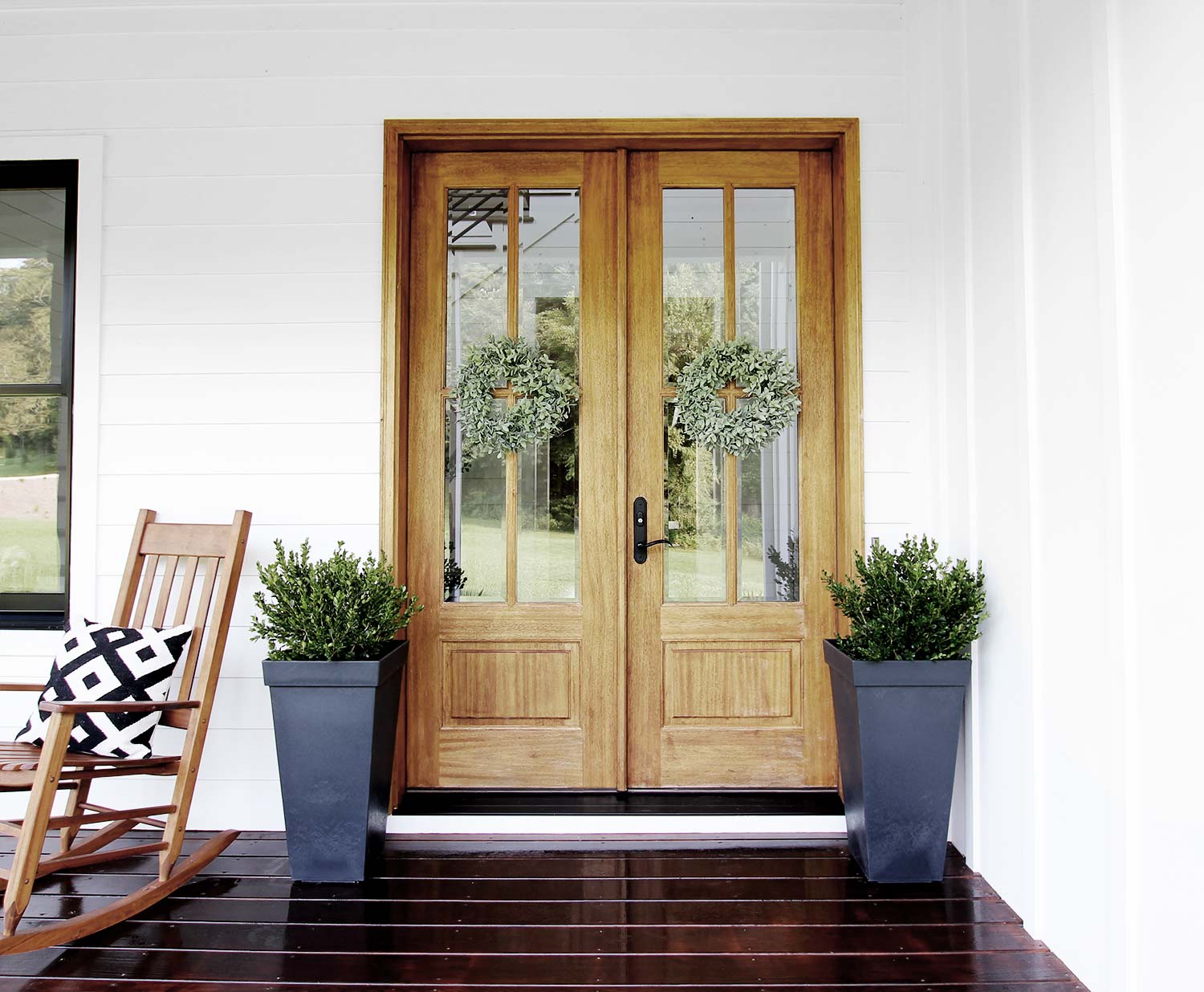 The pool area is tucked away between the garage and the house, which gives us lots of privacy. To add more “modern”, we decided on a simple rectangular shape. It’s surrounded by 2′ x 2′ travertine tiles and then pavers for walking area and a place to put our out door dining area. The rest of the area surrounding the pool we sodded for some added greenery. Our pool guy thought we were crazy for doing this, but we love the look, and it’s a breeze to take care of as long as you have a bag mower. 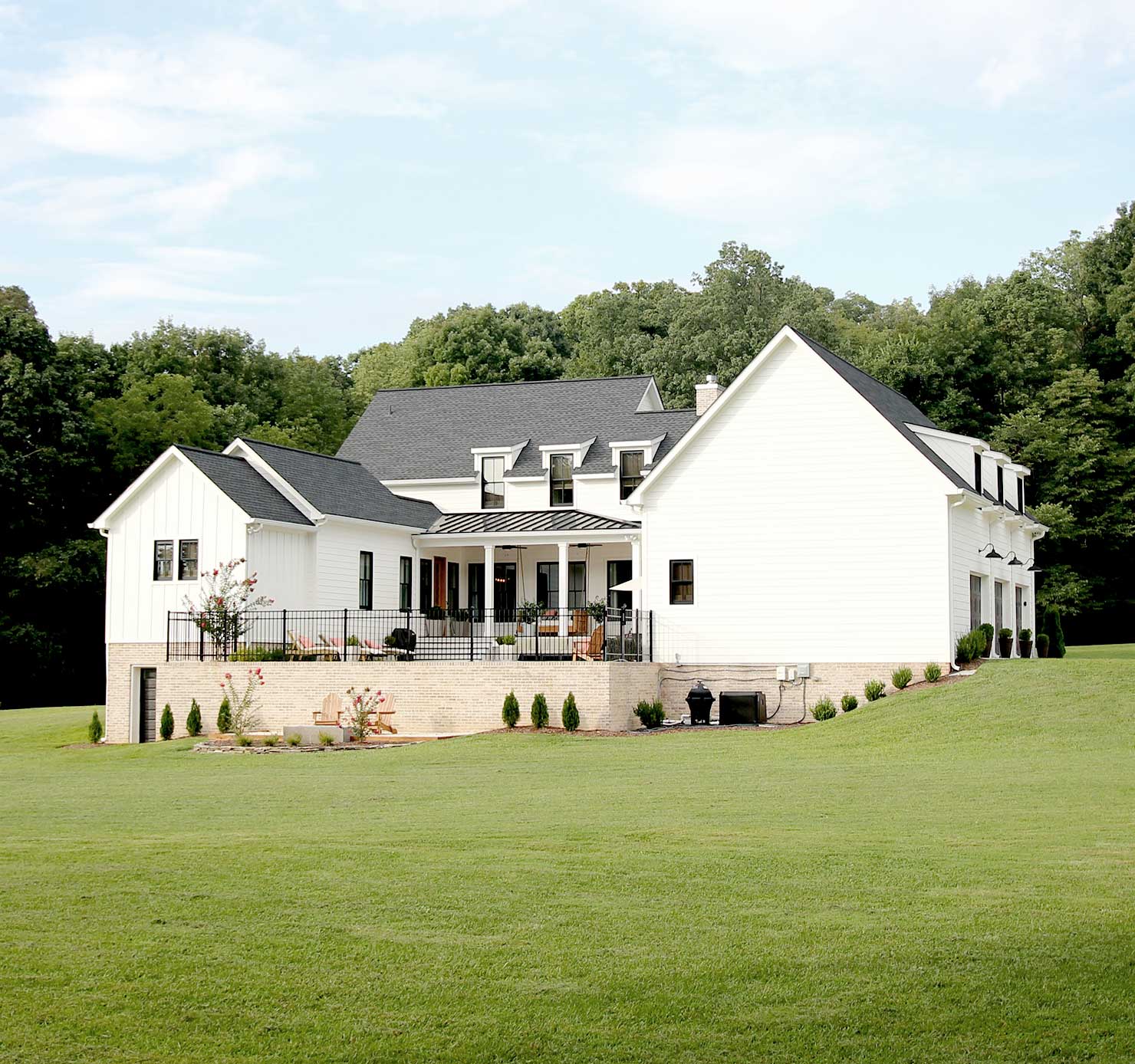 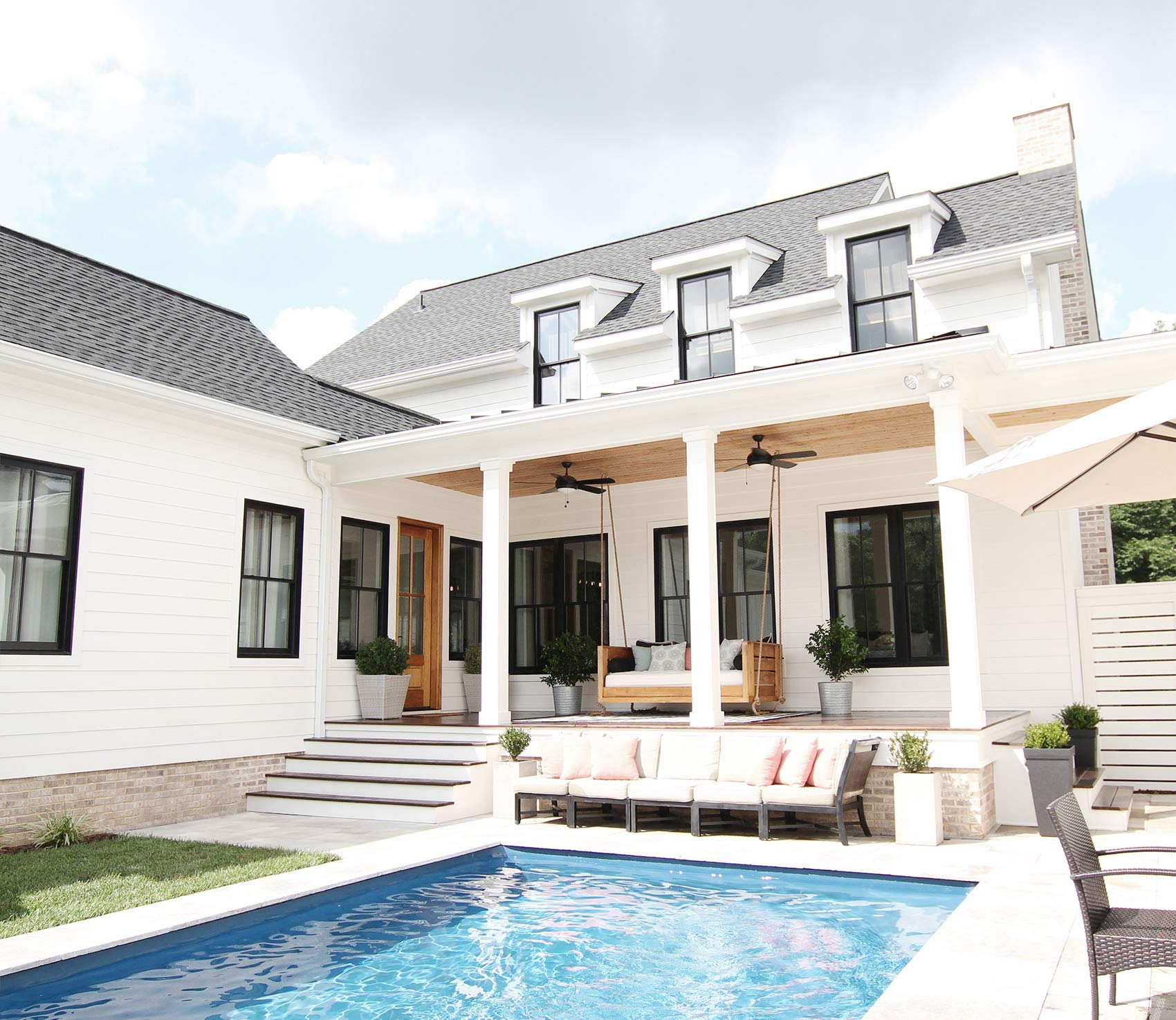 The swing bed on the porch was a DIY project for Henry. He built it shortly after we moved in. It was made to fit a standard twin mattress and we ordered the cover from World Market. He had made one for our previous house, but unfortunately the new owners wanted us to leave it. But to be honest, I don’t think Henry cared too much. He was itching for a new project.

He’s also getting ready to build one for my mother. Although it might be a different design. He’s going to document the process and we’ll be releasing a tutorial here on the blog. 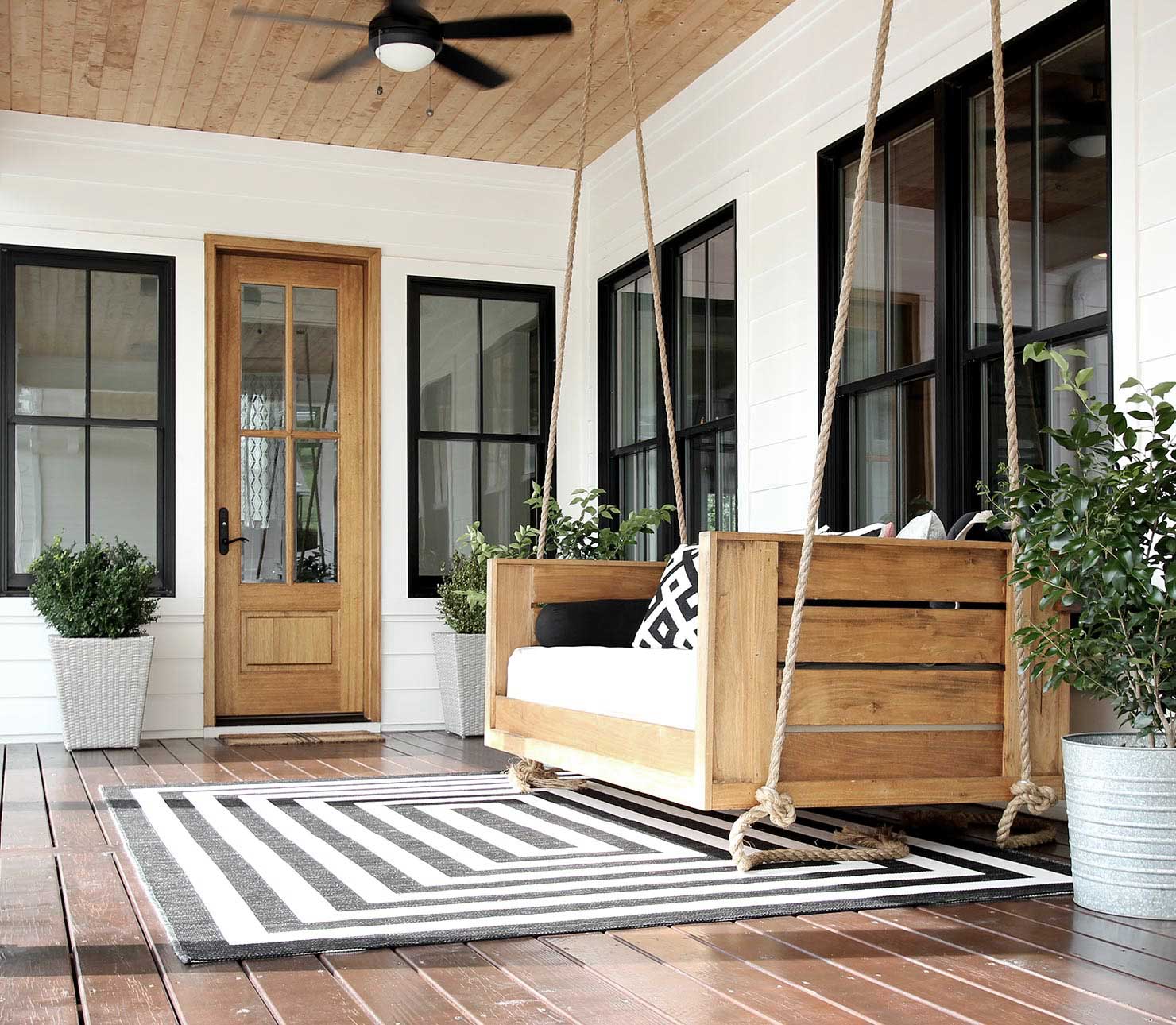 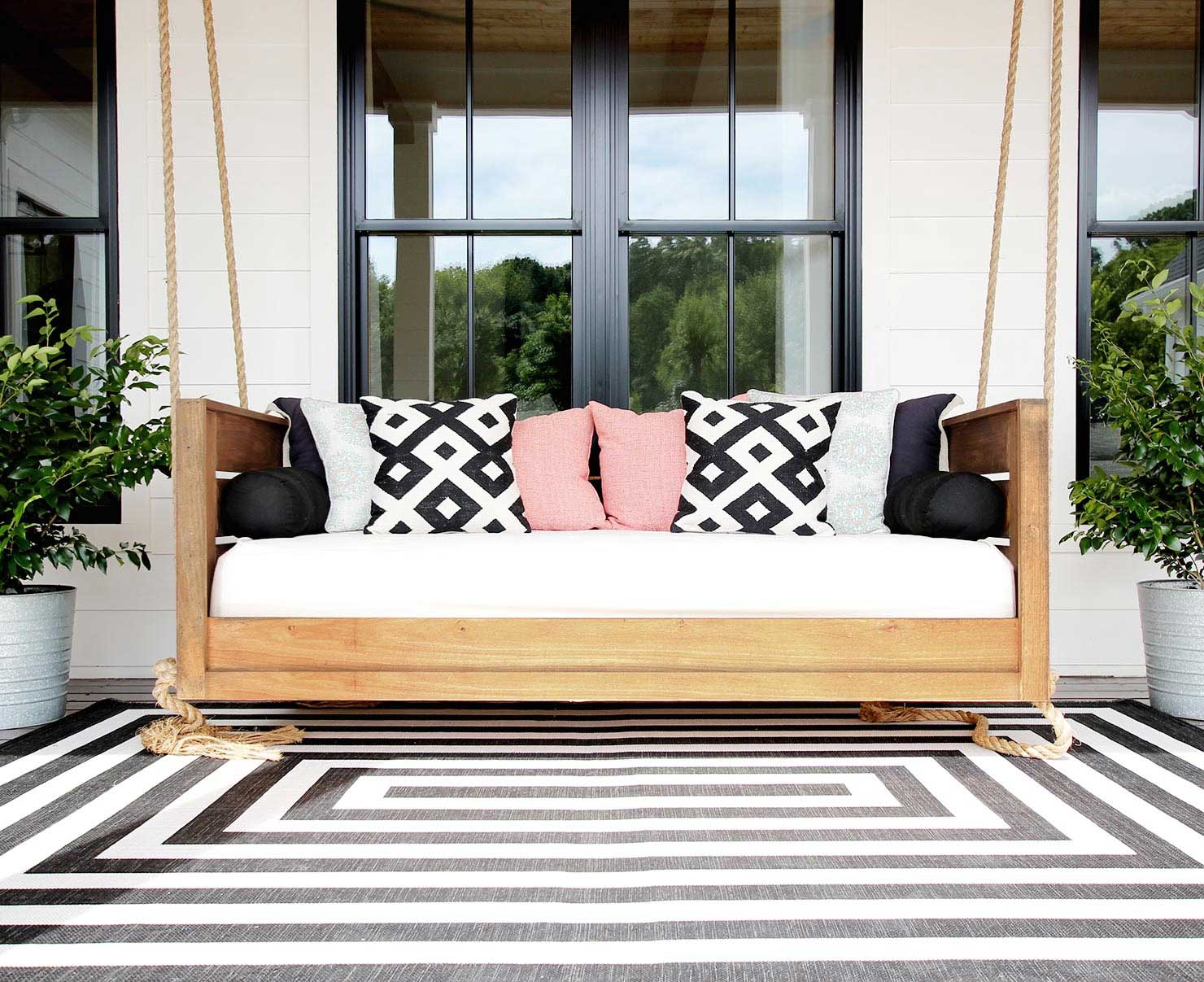 That’s it for the exterior tour. If you have any questions about what you’ve seen in this article, feel free to leave a comment below. I’ll be showing the inside in our next home tour post. 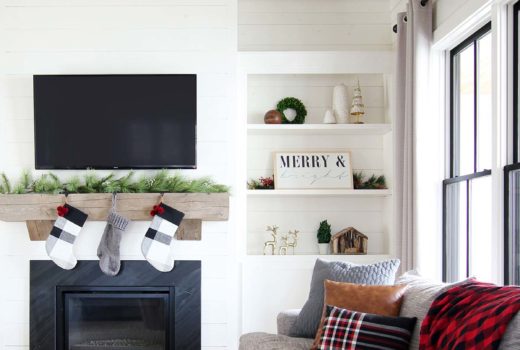 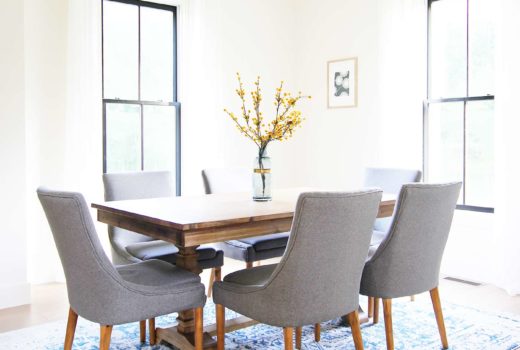 Our Modern Farmhouse: Foyer, Dining, and Half Bath