A couple of weeks ago, we started planning an office makeover for Henry. His office is in an extra bedroom upstairs, and up until now it has been bare bones to say the least. I’m talking a chair, desk, and computer. He was taking minimalism to a whole new level. So it was time to spruce things up and create a space that he could feel good about working in. The goal was to create a workspace that would help him be more creative and more productive.

We slightly deviated from the original plan. Sometimes you get into a project and see things a little differently. One thing we changed was the placement of his desk and accent wall. I wanted the wall to be seen from the hall way as you entered the room. Why create such a beautiful wall that can’t be fully appreciated? 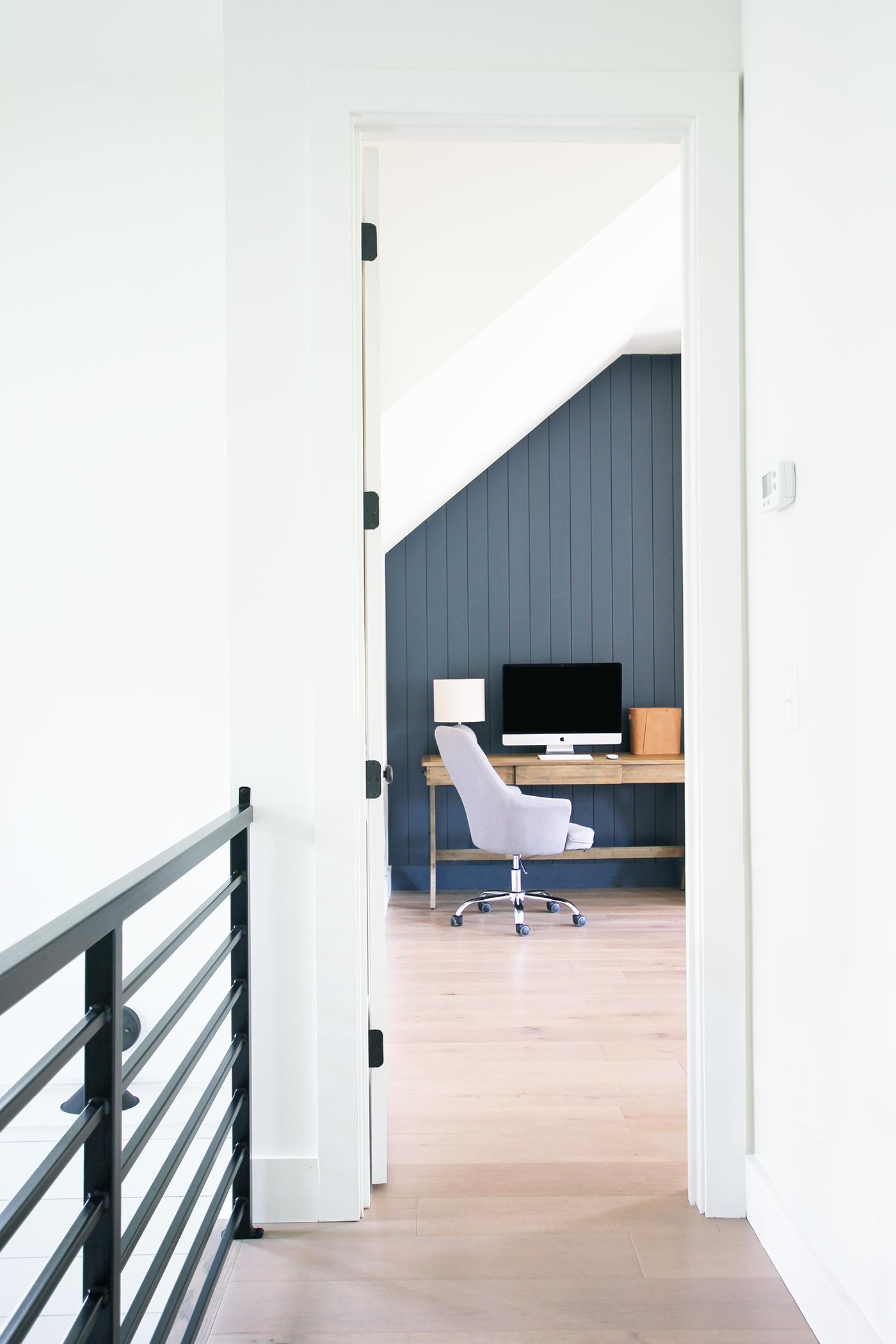 Since we moved his desk to this area, it meant a horizontally shorter accent wall. So we decided to run the shiplap vertically. And we’re so happy we did. We found this shiplap at Home Depot. It’s a narrower board than the shiplap we used when building. Which I think looks better ran vertically. 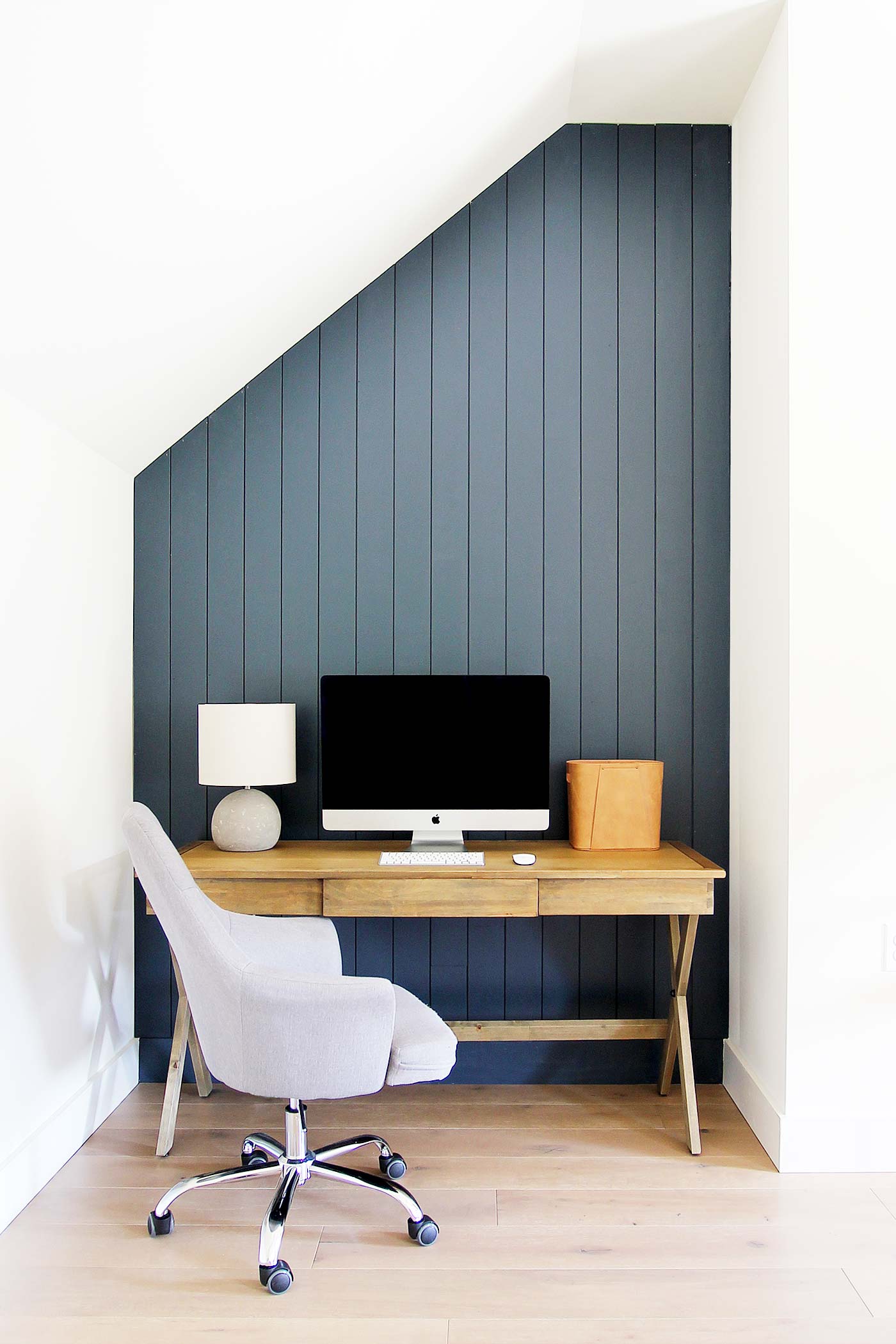 The shiplap wall is painted with Benjamin Moore Hale Navy in a satin finish. We wanted a color that was dark and not too blue. Since the wall turned out so much better than we were expecting, we decided against the floating shelf that we had originally planned. Right now, I don’t think it needs anything else.

We did end up going with a different desk. Henry’s old desk, which was a very dark wood, did not create enough contrast with the dark blue wall. Thankfully, we didn’t have to buy a new one. We simply traded with the kids. They didn’t mind. This desk is from World Market.

Since he did loose some storage by switching desks, I wanted to ad some kind of container for his desk that would look nice and neat. We found a really cool brown leather container at Target. This color leather is the perfect compliment for the Hale Navy wall.

For desk lighting, we found a very cool concrete lamp on Amazon. 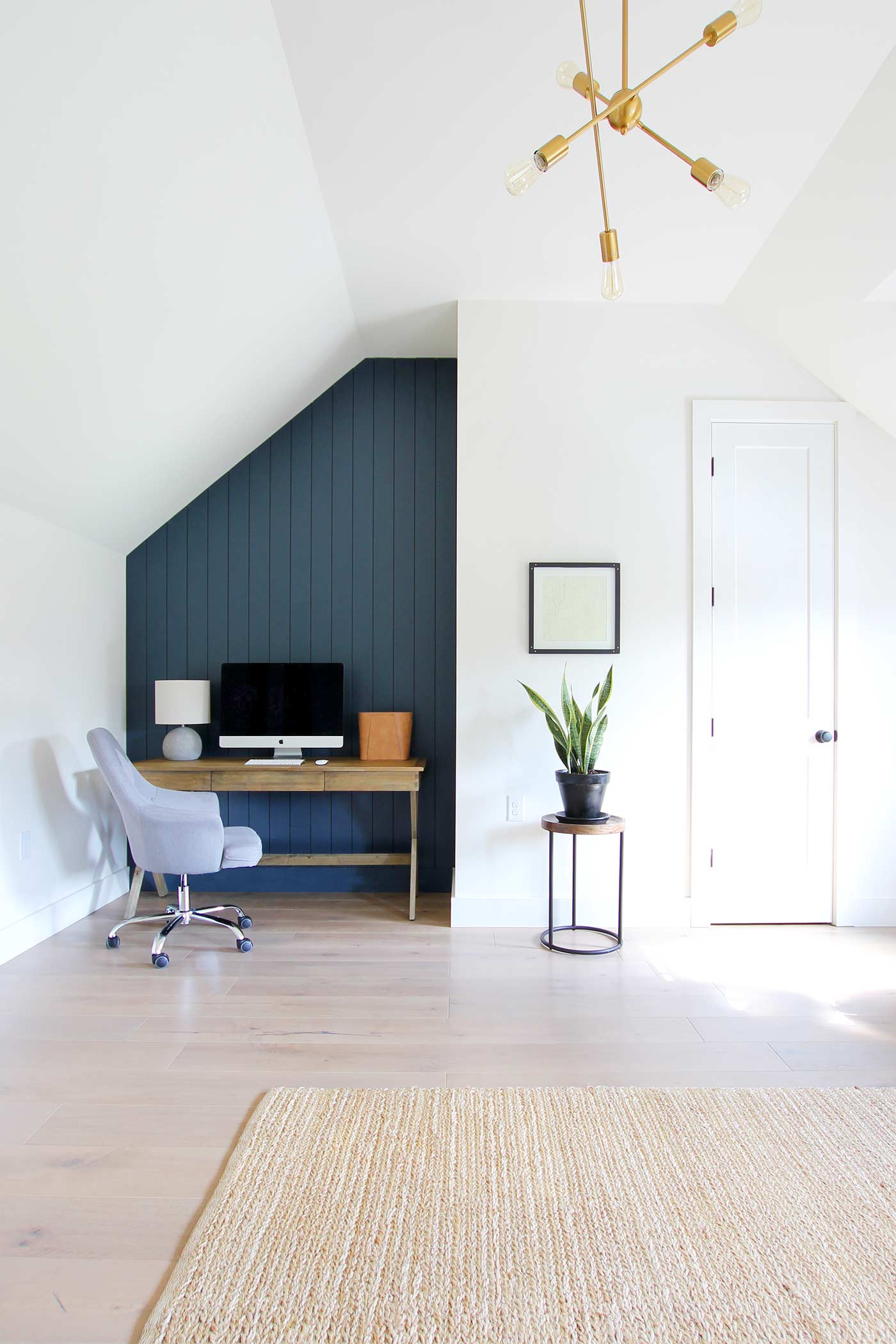 To add a modern vibe, we chose a brushed brass ceiling light with Edison bulbs from Amazon. When we do projects, we are very budget minded. There is no point in spending a ton of money on something that might be changed a few months down the road. And this light was an excellent choice. It looks great with the blue wall and was affordable.

We had planned on getting something like a Fiddle Leaf Fig Tree, but didn’t know that it would be so hard to find. Instead, we opted for a smaller Sansevieria plant and sat it on a side table we already had and weren’t using. 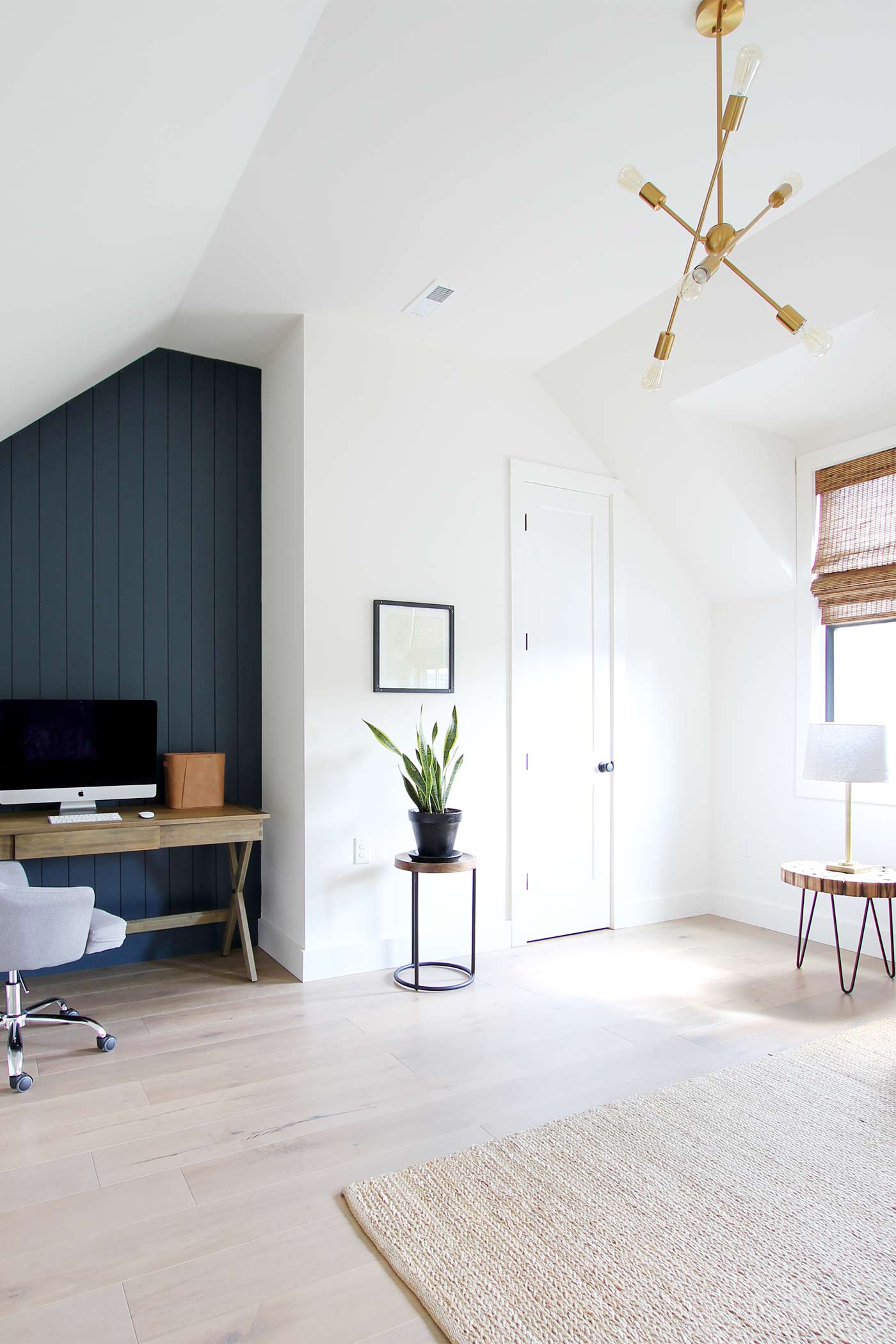 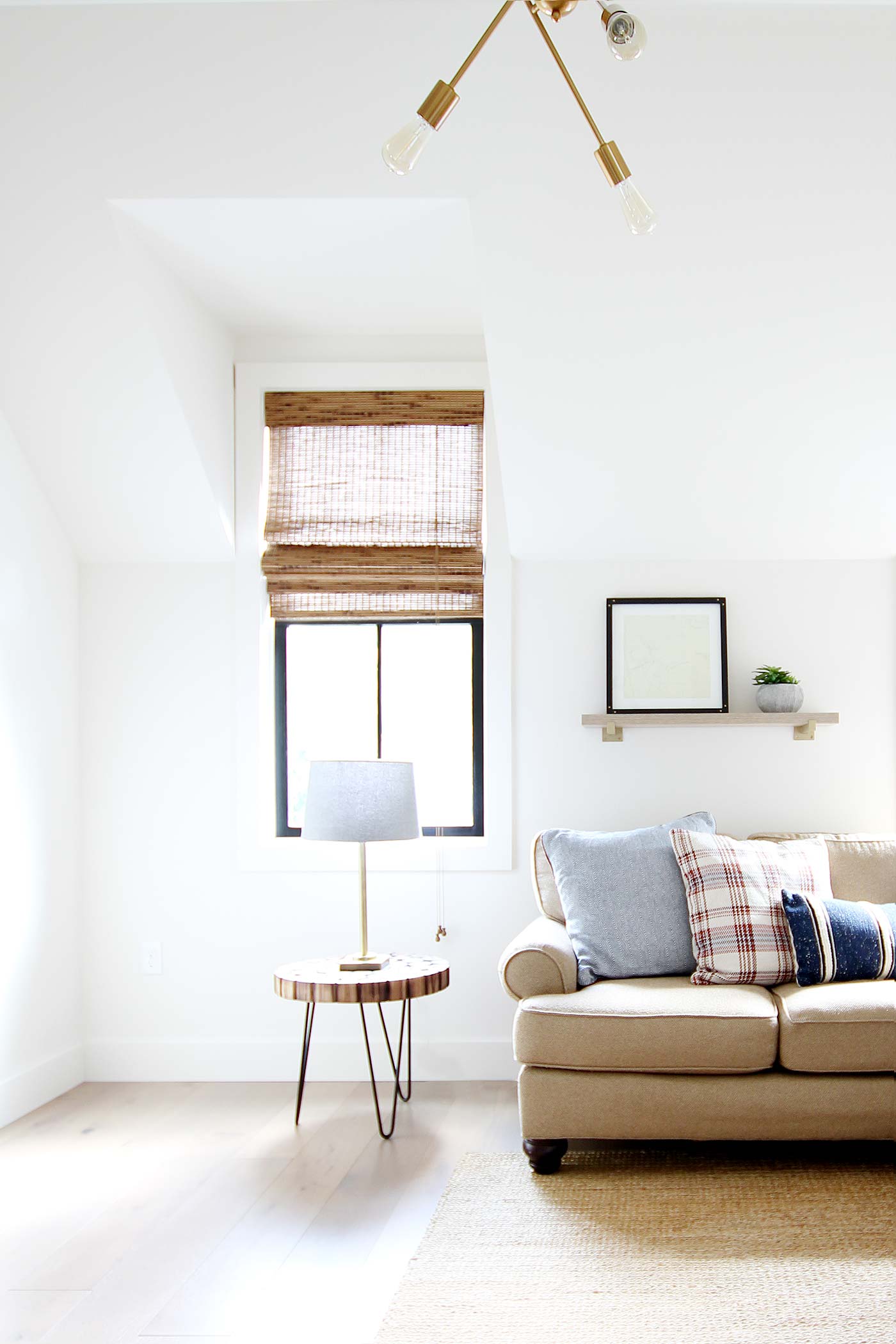 As an added bonus, he gets a sitting area in his office too. We totally didn’t plan on this. We’ve been in the midst of rearranging furniture in a couple of other rooms and somehow ended up with a sofa we weren’t using. It was a perfect fit for the extra space in the office. We’ve had this sofa for almost ten years. By adding some new pillows, it now has new life.

We are both so happy with the way his office turned out. We wanted to keep the the light airy feel the room naturally had, but add a little color, a little texture, and a touch of “modern”, while creating a space where he can do great work! 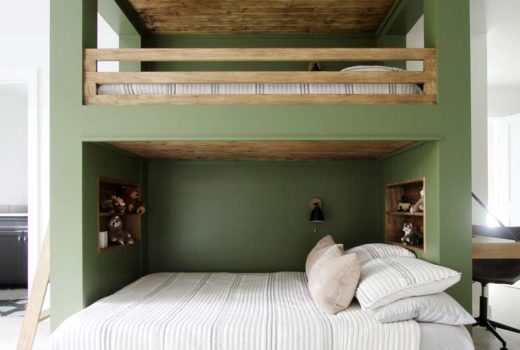 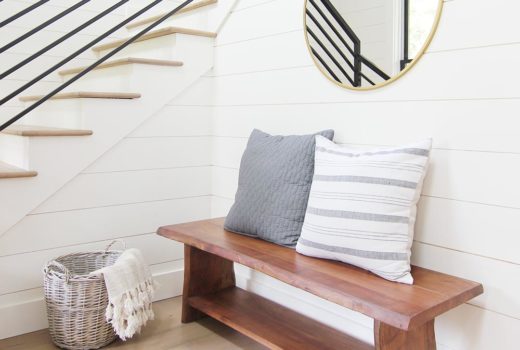 How to Install Picture Frame Moulding on a Wall